SETI@Home User Of The Day

I almost missed another one of my small moments in the spotlight! My cellphone battery had died and I hadn’t taken the time to turn it on until about 8pm on December 29th, 2010. Once I did I had a nice surprise! SETI@Home had chosen my profile (out of 1,144,744 users) to be featured as their user of the day on their homepage!

For those of you who are unfamiliar with SETI@Home, it is a scientific distributed computing project allowing us average people to take part in scientific research. SETI@Home runs on BOINC and can be installed on your computer. Once installed, BOINC will utilize your unused CPU cycles and use them for science. SETI@Home’s objective? To look for radio signals generated by intelligent life outside our solar system by processing data from the Arecibo Radio Telescope in Puerto Rico. This task is so calucation intenstive that it can only be done by splitting up the data and asking thousands upon thousands to do the processing required. To give you an idea about how much processing needs to be done each data unit is about 100 seconds in length. This 100 seconds can take around 8-9 hours to process!

I don’t know if intelligent life exists outside our solar system… heh, I don’t even know if it exists here on Earth sometimes. But, I love feeling like I’m a part of something that could potentially change the way Humans look at themselves. Perhaps finding another intelligent civilization will bring unity amongst us! Perhaps it will divide us even more! Who knows? But, the science being done by the SETI@Home and other SETI projects could change life here on Earth as we know it!

So, why did the SETI@Home team choose my profile out of all the 1,144,744 profiles?! Could it be because I’ve been a member of the SETI@Home project since May 16th, 1999? Or perhaps because I’ve contributed almost 750,000 credits (not including the 15,303 hours contributed to SETI@Home Classic)? Probably not. The most likely reason is it was just all random.

If you’re interested in helping the SETI@Home project out by donating some CPU cycles it’s free to sign up. The more the merrier! Just download BOINC, create an account and attach to the SETI@Home project. Also, if you’re interested you can join teams to help a team accumulate more credits. Feel free to sign up with my team the Intergalactic Research Team. We could use the help. Also, once you’re signed up and processing data you can watch SETI@Home do some of its magic like below. 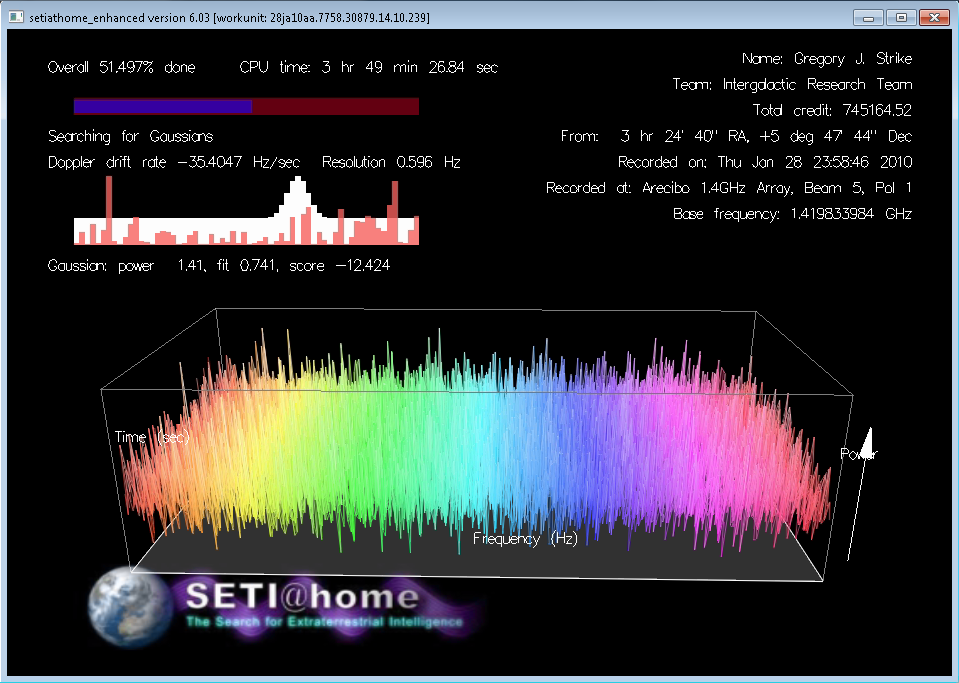